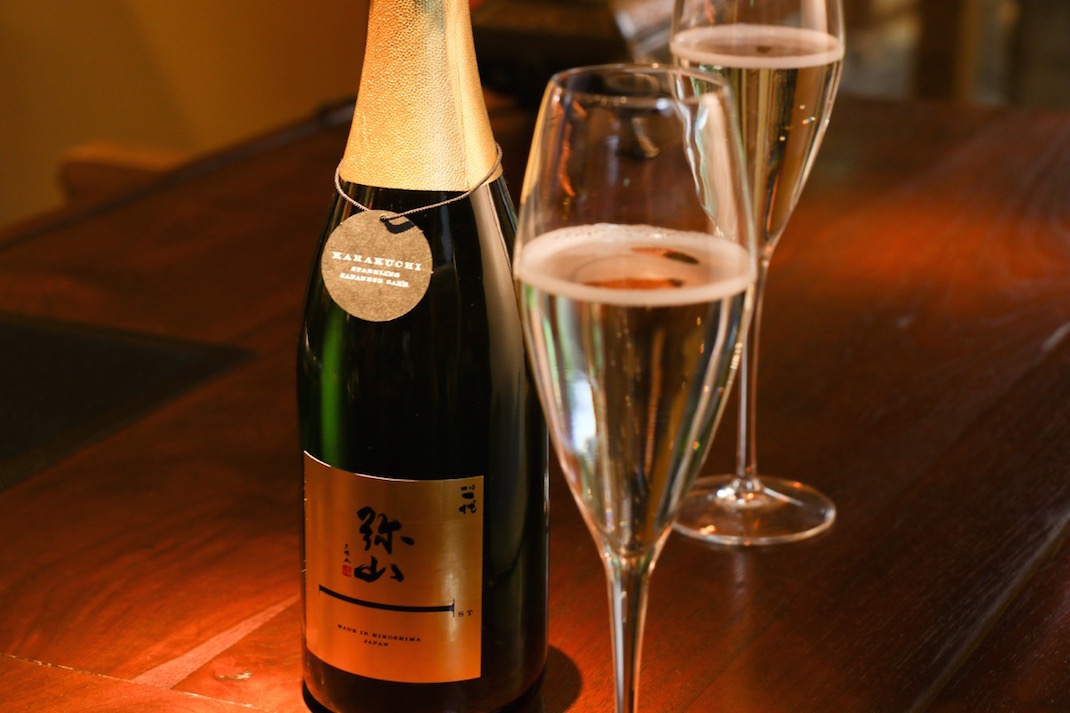 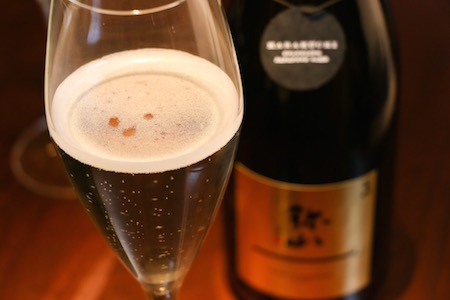 Because of unique carbonation technique, fresh and clear body is kept, along with rich and strong carbonic acid. The bubbles is fine and remove difficult, as the result, you could taste it leisurely.

It took three years for developing Itidai Misen Sparkling. We pressured carbonic acid in the existing sake at first. But what an awful thing is that, it tasted bitter, and the fruity bouquet of sake was changed. We realized it is not an easy thing to develop Sake Sparkling. However, we didn’t give up and we can’t give up. A lot of trial tests were made. Finally, a kind of mellow and mild sparkling-only Sake was developed, matching carbonic acid perfectly. Itidai Misen Sparkling with excellent quality is 11%, dry, no bitter, easy to drink. Enjoying with delicate Japanese Cuisine is recommended. 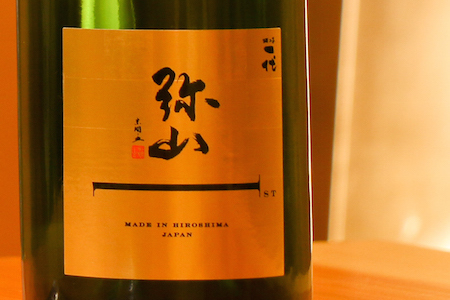 The name of this Sake Sparkling comes from the name of MISEM, one of Nihon Sanke (Three most scenic spots in Japan). For the inscription of Misen, the head of a famous Teaism of Hiroshima, Ueda soukei, inscripted, did it. You can see “一”（means 1st in Japanese）in the label, which means drinking for cheer (the first drink). The gold leaf of the label shows strong Japanese style. 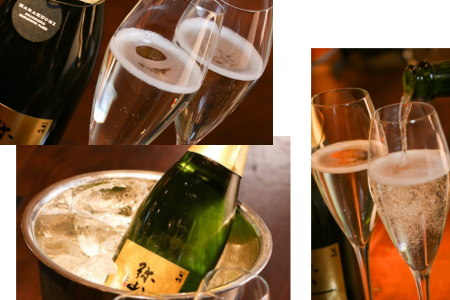 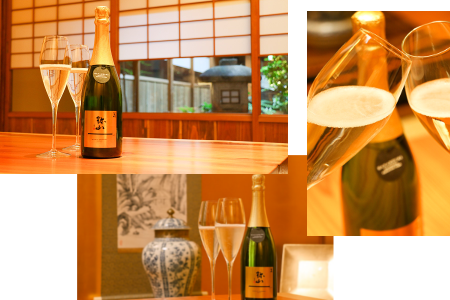 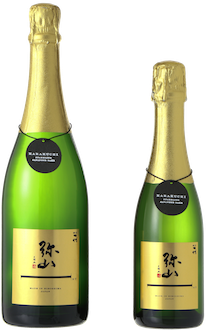 Superior quality Sake sparkling
We developed a kind of sparkling-only Sake, in order to fill carbonic acid gas into Sake perfectly. Low-alcohol Junmai-shu (pure rice Sake) is used, so that it tastes mild and mellow. Fruity sour by fermentation technique spreads in your mouth.

Produced in Hiroshima Prefecture and using its water, it is a pure rice sake made with ingredients specifically selected for brewing sake.

The fruity flavor, the hearty taste of rice,
and an insatiable smooth aftertaste are the characteristics of the junmai ginjoshu with no added alcohol. 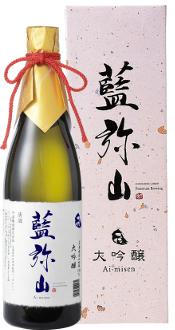 The rice malt is hand-made by Toji (chief sake brewer) and Moromi (fementation mash) is grown up slowly at low temperature in the coldest season.
This daiginjo has very well balanced taste with rich fragrance and fresh taste. 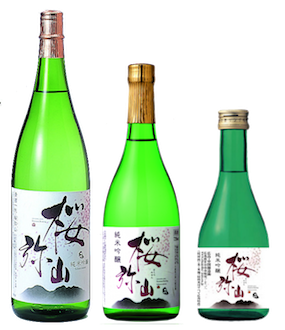 A fruity bouquet, fresh rice taste and refreshing aftertaste features Sakura-Misen. It is suitable to drink during the meal. 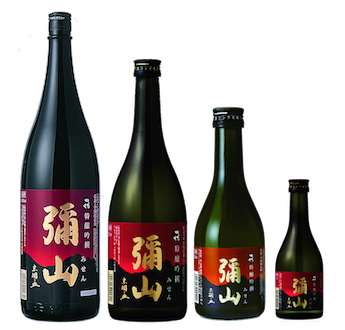 Made from carefully selected rice with traditional technique, the feature is not only dry taste but also rich flavor. 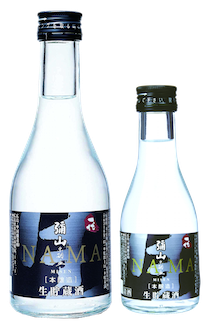 Light and smooth taste is excellent with any kinds of dishes. It is eminently drinkable sake called Namachozo-shu that is stored without heat treatment, and then heated just before bottling. 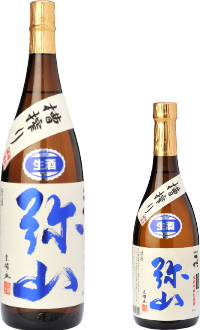 It is made with rice, 「Koiomachi」and「Hattannishiki」, which are suitable for brewing sake from Hiroshima Prefecture. The hearty flavor of「Koiomachi」and the smooth aftertaste of「Hattannishiki」come together to form this special sake. In order to keep the flavor of the sake, we use a special bottle called kanbin for warming the sake. It is a junmai ginjo unfiltered and unprocessed sake. It is a special junmai sake, made by deliberately fermenting sake brewed in the 「Yamahaishikomi」method – sake brewing method using natural yeast and no mashing 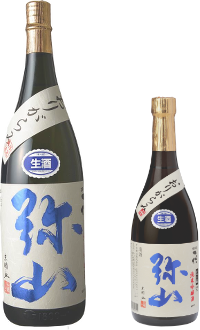 A special bag is used for filtration of fermented glutinous rice by gravity of liquid but not pressure. It is seasonal new brewed Sake with fine draff. Characterized with refresh Ginjo bouquet and rough feeling taste. (Manufacturing Manager: Masaki Yuta)
It has been about half a century since SAKURAO Brewery and Distillery started brewing sake in 1963.

Receiving the gold prize at the Annual Japan Sake Awards in 2011 gave birth to the limited distribution product in the「Ichidai Misen」series.

This product is sold only at specified specialty stores.

Growth of the Cellar – Talented People Led to First Place

Among about 900 sake entries, half of them received a prize, and only half of those received the gold prize. It is very difficult for a local cellar to earn the gold prize. Oftentimes they are only able to make one entry, while big sake brewing companies that own multiple cellars are able to craft multiple entries.

Despite of such shortcomings, the reason why we were able to earn several gold prizes is due to our production facility, sake brewing network, and, more than anything, our talented workers. Ichidai Misen is a ginjoshu with no added alcohol that has a jinjo flavor (fruity flavor), a hearty rice flavor, and an insatiable smooth aftertaste.

The taste is so strong that even brewers from the prefecture are able to taste the unique「Misen」 flavor during taste tests. We only use rice produced in Hiroshima Prefecture.

We bring out the full taste of rice’s original flavor by using soft-textured rice,「Koiomachi」, normally a difficult ingredient to produce rice malt with. Hiroshima Handling Even on the Label

The characters on the label of the Ichidai Misen products were written by Soukei Ueda, the head of Hiroshima’s Soko Ueda-style tea ceremonies.

Borrowing Hiroshima’s power, we brew sake that is famous throughout Japan.

2018/06/14 Ichidai Misen Sparkling was awarded GOLD in the sparkling division at SAKE COMPETITION 2018.

2016/08/24 Perfectly matched with Japanese Food, Misen sparkling is your best choice for Cheers!